You can add html or text here

Maximizing the reflective qualities of both its glass and titanium exterior and the surface of the lake it sits on, China’s National Grand Theater resembles nothing so much as a gigantic metallic egg. Housing three performance auditoriums, the theater boasts an underground entrance as its only means of access, preserving a mysterious, island-like effect.

It is a curved building, with a total surface area of 149,500 square meters, that emerges like an island at the center of a lake. The titanium shell is in the shape of a super ellipsoid with a maximum span of 213 meters, a minimum span of 144 meters and a height of 46 meters). It is divided in two by a curved glass covering, 100 meters wide at the base.

During the day, light flows through the glass roof into the building. At night, the movements within can be seen from outside. The building houses three performance auditoriums – a 2,416-seat opera house, a 2,017 seat concert hall and a 1,040 theatre – as well as art and exhibition spaces opened to a wide public and integrated into the city.

The building is connected to the shore by way of a 60-meter long transparent underpass. This entrance leaves the exterior of the building intact, without any openings and mysterious looking while providing the public with a passage from their daily world to the world of opera, fiction and dreams.

The areas inside that are open to the general public take the form of an urban district with its succession of different spaces: streets, plazas, shopping areas, restaurants, restful spaces and waiting lounges. This public area is highly developed in order to endow the building with its open, popular character. The complex is designed as an open forum not a place for elitist shows. The different performance auditoriums open onto this common concourse. Their entrances are positioned so as to ensure an even distribution of people, and a smooth, easy flow everywhere while giving each element in the project a distinctive character.

The opera house is at the center. It is the single most important element in the project, and by the art that is practiced there, it is the one that is most dependent on convention; most mysterious too. The concert hall and the theatre are situated on either side of the opera house. Access to the performance halls must never be brutal. It has to be something gradual, something that requires time and space.

The performance halls and public areas are built on a base that houses all operating and support facilities in a complex designed to be as efficiently and economically organized as an industrial production area. At the same time, this technical utility area never mars the harmony of the public areas and the pleasure of visitors and theatre-goers.

The opera house is covered in a gilt metal mesh. It is opaque over the walls and when the areas behind it are unlit but it becomes partially transparent when there is light in such as way that it reveals what is there while creating a distance. The spectators enter the opera house through one of the two big doorways in the gilt ring wall. When they cross this threshold they penetrate into a world of vertical circulation that takes them even farther away from the outside world and draws them near the point in time and space when the show will begin. From the lobby, they are still visible in the distance created by the partial transparency. The wall thus expresses closure and separation but also, and more significantly, the psychological and symbolic distance that has to be crossed to gain access to the world of theatrical conventions.

The whole project can be defined as a play on successive envelopes, passages and crossings, transparency and light.

A lounge on the highest level under the roof affords the general public and theatre-goers alike with a view of the city all around that varies at different times of the day. From here, the city can be rediscovered from a hitherto unseen perspective.

The decision to build the Grand National Theatre in a place of such historical and symbolic import clearly testifies to the importance given to culture in its relationship with history and the contemporary world.
In such a context, it was out of the question to make an obscure, less prominent building of lesser importance. But neither could it pretend to be an isolated structure onto itself. For this reason, we strove to create a building that shows respect for the buildings around it, each of which marks in varying degrees the history of architecture in China, but that demonstrates the vitality of modern architecture by being as bold as they were in their day. 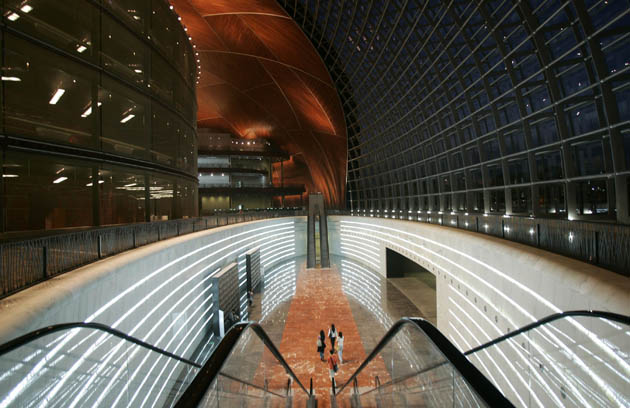